Richard Osmaston on The Transition

"... This is how we will move to RBE on "Thursday". On Wednesday, all is as normal, work, school, shop, etc., etc. At midnight, NOTHING CHANGES, we just don't charge, and are NOT CHARGED ever again. On Thursday, do the same as you always did... Just carry on, just without the $ sign. Work, school, shop etc, but NO CHARGE. All bills and debts, GONE !!!

I think the big mistake we've all made in this amazing journey is to not recognize that the REST OF THE WORLD is also waking up. On that magic Thursday, everybody else will be of the same mind... There won't be anybody left objecting anyway. No battles, no protest, no riots. It just makes sense. This makes me so so incredibly HAPPY !!! - Richard Osmaston on the "Resource Based Economy" fb group.

Richard in the December Edition of "Wild Tomato" Nelson, NZ 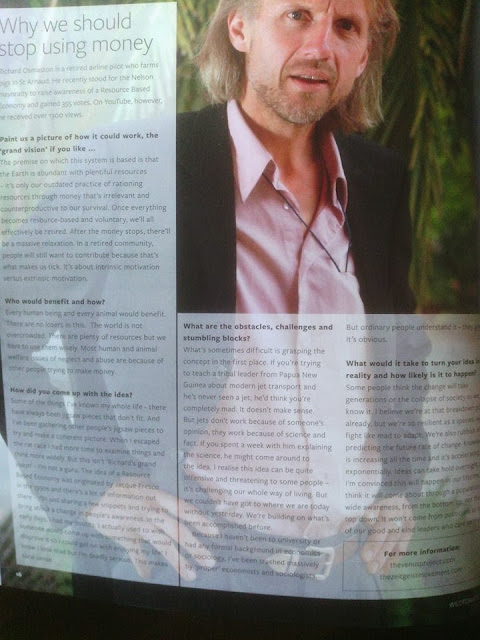 Richard ran for Mayor in Nelson in September-October 2013.  Following is an excerpt from a local publication reporting on a Public Forum held in Nelson for candidates to address the people:

"Mr Osmaston, who grew up in England, described Nelson as a special place for its levels of sophistication, when it belonged to one of the world's most remote countries. Nelson's geographic isolation and openness to different ways of thinking meant it was ripe for seeding his vision of a resource-based economy where "we no longer need the money system and no longer have the need to destroy the planet".

"He said the current false values system was turning people into monsters, where "the ruthless prospered and the gentle, empathetic, weak and helpless were trampled".

"The only distraction to his rhetoric over the moneyless economy where "everything is free" was the tinkling of coins being placed in the meeting koha basket as it was passed around the audience.

"Mr Osmaston's rousing speech about humanity not benefiting from increased consumption was met with increasing applause from an audience becoming familiar with his oratory on the subject."

Email ThisBlogThis!Share to TwitterShare to FacebookShare to Pinterest
Labels: Richard, The Transition

Thanks for your comment. I'll get back to you soon...